Given all my travels, I guess it was time for me to be in an accident! Throughout my career, I’ve heard so many awful stories from colleagues about accidents they’ve been in during business travels. The worst may have been a colleague who told me that during a business trip in Romania in the 1990s, he was first in a plane “crash” when the wheels didn’t unfold during landing and they went off the tarmac and into a nearby forest, and then he was in a car crash a few days later. Fortunately, he survived both! Although it happens, it’s rare that I hear of people who have been in plan crashes. Traffic accidents on the other hand is a relatively common cause of death for development professionals and international civil servants. So I guess it was my turn.

The accident happened when I was in Kampala in November. Actually, it felt almost like the law of attraction, because Kampala traffic is quite chaotic and I’m always worried about being hit by a car or a boda boda when I’m there. During this trip, it was on my mind a lot before the accident happened, but I wasn’t hit while crossing the street which was my main fear. Instead, I was standing by the back door, putting in my bag in the backseat of our SUV, when the driver started driving. Ouch! Fortunately, he didn’t realize what was happening until the wheel had rolled over my foot because I don’t know what would have happened if he had stopped on top of it! I spent the rest of the day in doctors’ offices and getting x-rays before finally jumping out on two crutches with a few painkillers and a very, very swollen foot in an elastic sock.

I guess being in an accident like that reveals who we really are, and I saw a not entirely flattering side of myself. When it first happened, I went into a state of physical shock, and started shaking and completely lost all feeling in my foot. It scared me terribly that I couldn’t feel anything and I thought my foot was completely gone (actually, my first thought was that my ballet classes were a thing of the past). My colleague then helped me into the car and we drove quickly to a clinic. What I didn’t think about, though, was the driver. I’m not writing his name here, but he was of course in a terrible shock too. It wasn’t until we got out of the x-ray clinic some four hours after the accident, and had gotten confirmed that nothing was broken, that I asked him how he was doing. And no,, I’m not very proud of myself!

The doctor in Uganda was a senior doc who had probably seen everything, and he told me that in theory, I could walk on the foot but that it would be too painful. He thought that I should be able to run on it in about six weeks, though. My office manager wanted me to fly home, but I had too much fun stuff planned for the rest of the time there, including a bucket list experience, so I decided to stay. And with the no nonsense doctor, I felt a little silly about the whole incident. However, when I got back to the U.S., I went to another doctor who gave me a surgical boot along with strict instructions to to stay off my foot for at least another month. No running in six weeks in other words!

Since then, my boot has been with me on no less than three international trips (twice to Sudan and to three islands in French Polynesia). The boot really made things easier because connecting at international airports on crutches turned out to be quite a pain! And even though I first went on a safari and then did a work trip to remote pastoral areas in northern Uganda while still on crutches, I’m not sure I would have been able to walk across sand dunes to see ancient pyramids in Sudan or gotten onboard the boats that took us to our hotels in French Polynesia without that boot. I even managed to swim with sharks in Fakarava and make a short hike up to a waterfall in Tahiti. I should have been in Lilongwe for work right now, but it got cancelled. Otherwise, my boot would have started to resemble that little garden gnome in the movie Amélie! 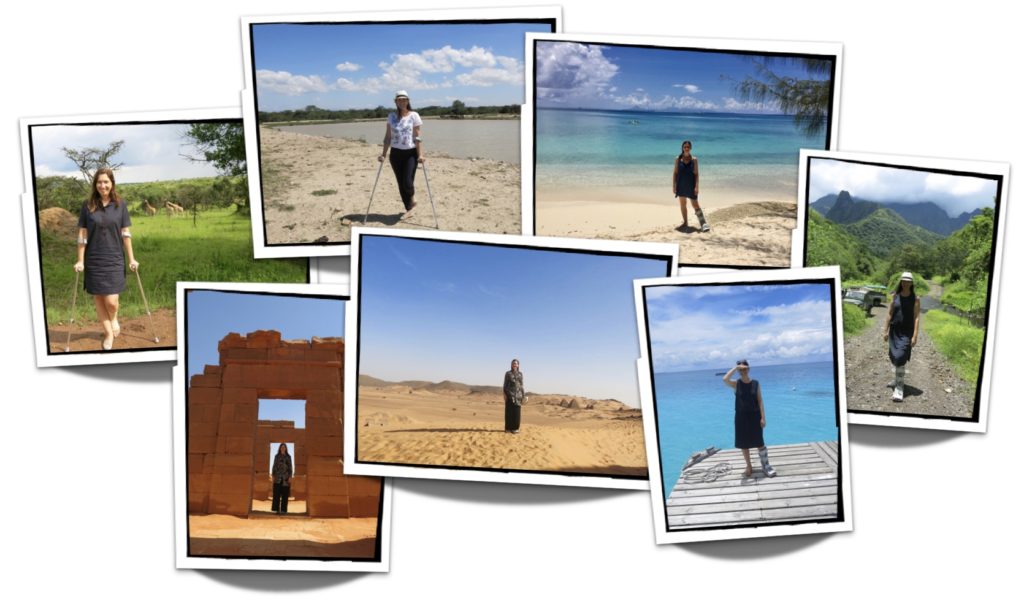 Anyway, after slowly transitioning out of the boot and walking in regular shoes for exactly five days, I now seem to have gotten a stress fracture and am walking around in a surgical shoe. So no dancing or running for me for yet a few weeks! At least not on two feet…

My friends and colleagues here have been incredibly helpful, especially in the beginning when I couldn’t move around so much. Living alone is really challenging with something like this happens! Working through the American healthcare system for the first time has also been quite an experience, but I won’t write about it, it’s too depressing. All I can say is that those of you who have universal healthcare, be happy!